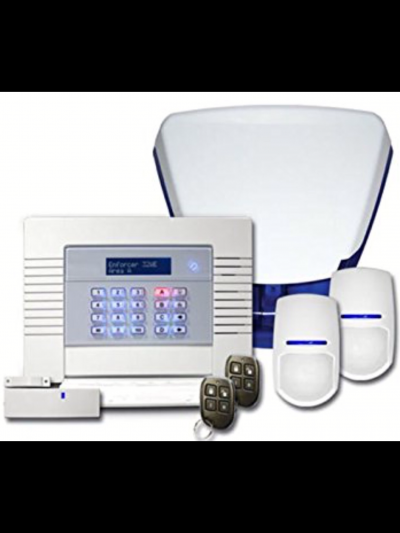 Save €€ with our no monthly fee GSM alarm systems

It can often be the case that people pay 100’s of Euros for an alarm system only to find  that in addition they are also required to pay further monthly fees which is in addition to the initial cost of the alarm system. Have you ever stopped to think how much these monthly fee’s add up to ?

Our systems enables you to enter 3 different phone numbers in to the system; in the event of an alarm activation the system will automatically telephone these numbers in order to alert you to the activation. Maybe you will have your own mobile as the first number to call or maybe your property agents’s number and so forth. The choice is yours. All you need is a mobile sim card with enough credit to make calls.

For example 30€ per month calculates to

This system will contain an Enforcer GSM panel complete with GSM module, a Deltabell-WE module, two KF4-WE four button keyfobs, two KX10DP-WE wireless pet immune detectors (which can be converted to KX12DQ-WE’s by removing the pet mask in the lens) and an MC1MINI-WE mini magnetic contact.

All wireless devices know when the system is armed and disarmed.

Alarm Condition: During an alarm condition each activation of the movement detectors (PIR and DT) is transmitted to the ARC and the user, as well as registered in the memory log. This is only possible because detectors in the system never sleep after they have been activated, as other products from most other brands would do, therefore compromising security.

The two-way wireless system allows the implementation of the Double Knock feature for every wireless movement detector (PIRs and DTs). This feature is normally found on wired systems only and is used to reduce false alarms on difficult installations.

The ITDC technology enables instant wake-up and instant sleep of each device on the system, allowing continuous communication between the control panel and wireless devices, while preserving battery power. This technology not only provides installers with total control of each device, but also gives users peace of mind that they have a reliable and secure wireless system.

Ensuring that all wireless detection devices know when the system is armed and disarmed.

Ensuring that they are awake as soon as the system is armed.

One of the key advantages of implementing SSI technology is to allow the installer to view the wireless transmission signal strength on both the control panel and wireless devices in real-time.

The two-way wireless protocol has been developed to ensure that the communication between all wireless system components is protected on a very high security level. The protocol uses the 128 bit advanced encryption.

We offer tailor made alarm systems to meet each person’s individual requirements. For a free quotation, simply give us a call or send us an email and we will contact you